Deterioration of the Horn Antenna in Holmdel, New Jersey 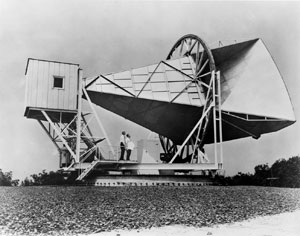 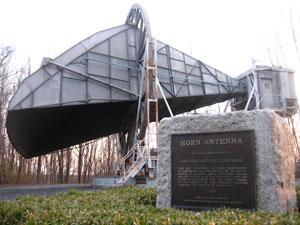 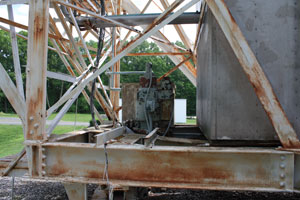 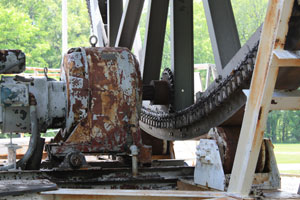 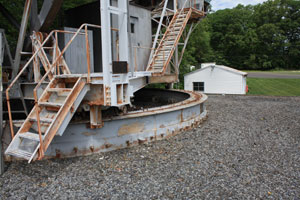 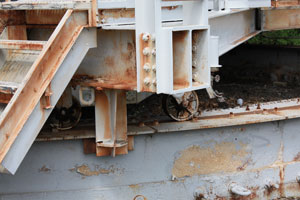 The following letter, written by Allan Cook of Cleveland, Ohio, gives his account of the condition of the iconic Horn Antenna, located in Holmden, New Jersey. A more detailed account of his trip to the Horn Antenna site can be found here (pdf format).

The Bell Laboratories Horn Antenna in Holmdel, New Jersey stands as one of the most revered icons of  Radio Astronomy and modern cosmology. By virtue of its skillful employment, Arno Penzias and Robert Wilson won the Nobel Prize for Physics for their discovery of the Cosmic Microwave Background Radiation. The same as with Edwin Hubble and the 100 inch Hooker Telescope at Mt. Wilson Observatory, the names Penzias and Wilson are rarely mentioned without a reference to the Horn Antenna. The purpose of this letter is to share, with as many people as possible, the sad story of what has been allowed to happen to this magnificent piece of engineering technology.

In May of 2010, I made the journey from Cleveland Ohio to Holmdel New Jersey with the sole purpose of seeing the Horn Antenna. What I found on arrival both saddened and maddened me. I found that the antenna had been sadly neglected and allowed deteriorate by those charged with the care of this National Historic Landmark, Alcatel-Lucent Technologies.

Upon returning home, I immediately contacted the National Park Service (NPS) and reported what I had seen. Although the NPS was sympathetic, I was informed that they have no enforcement power to assure that any landmark is actually maintained. They can make suggestions but it is up to the individual caretakers as to what recommendations they follow and which they ignore. This revelation came as a real surprise to me! My complaint did result in an ad hoc coat of paint and a few repairs but what is really needed is an on-going maintenance schedule. I heard nothing of plans for such a schedule. Without this commitment the Horn Antenna will inevitably return to the same, or worse, condition than it was in when I encountered it.

Faced with the above reality, I contacted the Smithsonian Institute to gauge their interest in acquiring the Horn Antenna as an exhibit. They informed me that both they and the National Radio Astronomy Observatory, in Green Bank, West Virginia, were previously and are currently interested in obtaining, and caring for, the antenna. The main obstruction to either organization making this acquisition was Alcatel-Lucent Technologies’ reluctance to donate the item. The very people entrusted with the Horn Antenna’s wellbeing are neither willing to providing the necessary care required by the antenna nor are they willing to give it to anyone who would be willing, and in an excellent position, to do so. These facts have moved me beyond frustration.

I have reached the point where I don’t think that there is anything else that I, as an individual, can do to achieve my goal of having the Horn Antenna restored to and maintained in the condition that it was in when so adroitly used by Penzias and Wilson. Perhaps if others, who share my passion for astronomy and history, became aware of the situation and became, even peripherally involved, a momentum could be created that would change the dynamics of what is now a static situation. To this end, I am sending this letter to the many places that I am certain that my passion is shared, the astronomy clubs throughout the United States. I ask that you post this letter on your web site, include it in your newsletters and disseminate the information in any manner you have at your disposal. I also ask that as many people as possible contact Alcatel-Lucent Technologies in France and the United States and encourage them to donate the Horn Antenna to either the Smithsonian Institute or the National Radio Astronomy Observatory. Finally, I ask that these same people contact the National Park Service and share our concern with them.

It is my hope that someday, in the near future, I will be able to, again, visit the Horn Antenna but under the conditions such a historic instrument has earned and deserves.