September 2010. One of the first things that new FBAC President Leonard Ferguson did was appoint a new East Dome (ED) Committee and charge them with getting the ED completely remodeled ASAP. The new members were Bob Askey, Joe Dellinger, Jim Jackson, Tracy Knauss, Justin McCollum, Derek Newton, Paul Noll, Stephen Walker, and Tony Wiese. And Paul Noll was asked to be the committee chairman.

9/11/10 first meeting of the new ED Committee (Paul Noll, Tony Wiese, Jim Jackson, Tracy Knauss, Stephen Walker, and Bob Askey attend) along with Leonard Ferguson FBAC President, and FBAC member Wes Whiddon meet out at the George Observatory to set a plan of action. 9/15/10 several committee members meet in the evening and begin to sort all of the stuff under the raised floor.

November 2010. To accelerate the work effort Paul Noll, Tony Wiese, and Jim Jackson work late during the November evenings of Mon the 1st, Tues the 2nd, and Wed the 3rd. And, then on the weekend of the 6th and 7th work continues long and hard. Paul Noll and Tracy Knauss pull the primary mirror off the 18-inch scope to clean it and find it and the secondary need to be recoated. Recoating the mirrors will give the telescope better optical resolution (seeing ability).

Stephen Walker starts getting bids for refinishing the primary and secondary mirrors. Thurs November 11th, Fri 12th, Sat 13th and Sun 14th work continues long and hard. Then on 11/20/10 the "new" East dome is once again open to the public. A number of minor things remain to be done, but the ED is open again.

Special thanks to Paul Noll for heading up the ED renovation effort.

April 2011 Tony Wiese works to determine what kind of computer is needed to upgrade the ED Control Computer as well as to add a new Image Computer. Because the ED telescope software is XP based, it was required that the new computer be native XP. Another requirement was it also had to have a serial port for the telescope to hook up to. Tony Wiese used some of the money he got donated by Sam's Club in 2010 to purchase a refurbished XP based computer for the new control computer.

Charles Konon then went ahead and donated a refurbished XP based computer to be the new ED Image Computer (Computer "B"). Charles and Corie then setup and installed the new Image Computer as well.

Thanks to Charles Konon and Corie Rowe for their considerable efforts in getting the two new computers setup and running. Additional thanks go to Charles for his donation of the second computer, the new Image Computer. And, special thanks go to Sam's Club for their 2010 donation for the new Control Computer and two full motion mounts. 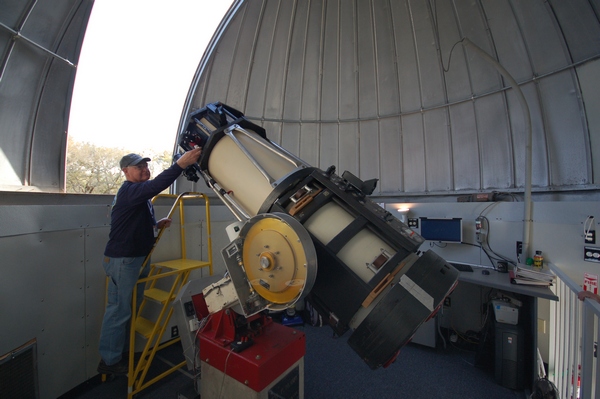